Some mysterious facts about Nyatapola Temple

Nyatapola Temple By its name, the pride of Bhaktapurians rises to its height. This architecture is just beyond the imagination of a normal person. A 33-meter towering temple, ideally, is furnished with a piece of amazing artwork.

Lately, many archaeologists and researchers are getting interested in Nyatapola and its composition. No wonder, they also get wondered by this wholesome five-tired architecture.

Here, we have collected some amazing facts about this art species, Nyatapola. Hope you would like that.

Nyatapola is the tallest pagoda style temple in Nepal. I guess all Nepalese citizens know about this fact. But, in the current perception, it is also standing as a monumental heritage. People call it Nyatapola dega because it is a sacred five-storeyed temple.

There is a belief that those five tiers of Nyatapola are the symbol of the earth, water, fire, air, and the sky respectively. Well, this temple is dedicated to Goddess Shiddhi Laxmi, who is considered a powerful tantric goddess.

Moreover, this temple is made in the seismic template. Probably because of that, this temple survived all the earthquakes that occurred until today after its existence.

Foremostly, the erection of this temple was ordered by King Bhupatindra Malla and was completed in 822 N.S. Kartik Suddhi Tritiya, by Thursday. That means by the year 1702 A.D.

Materials used in the making of Nyatapola

Nyatapola temple was made in such a short period that it took only 214 days from digging to the completion of the structure, including the placing of its pinnacles. Though, it took only eighty and eight days to stand as a giant structure.

It is said that to fix the pinnacle and erect the icons in the Sanctum Sanctorum, the makers of Nyatapola had to wait for another thirty-eight days.

The sole pinnacle of Nyatapola is forty Dharni.

Proximately, all these things became possible because of the joint effort of the king and the public. Historic records found building Nyatapola was possible with around 11,35,350 bricks and  1,02,304 telia bricks. They were delivered from Thimi, Bode, and Nagadesh.

With that, the stones used to make guardians were from Chovar. Faithfully, all the neighbours helped Bhaktapur with their capacity besides Kantipur and Kritipur. At the same time, King Bhupatindra Malla introduced eight brick industries outside the Bhaktapur Nagar.

Similarly, the wind bells around each tier of Nyatapola, seem most likely the expression of the temple. Sitting on its pedestals and having eyes on those wind bells is an exceptional feeling. Practically, it is not possible to count those wind bells just by glaring at those tires.

Why does Nyatapola get always closed?

This temple is dedicated to the goddess Siddhi Laxmi. But most people have no idea of what she looks like. Only the priest who got the chance to enter the temple knows about her appearance.

However, the shreds of evidence say that she certainly has an extreme face. That black-shaded statue of her has 9 heads and 18 hands. Foremost, she is said to be accompanied by the Masan Bhairava and Mahakal Bhairava.  The statue was all set as per the extreme tantric procession.

Perhaps, that’s why she is not available to ordinary people. But, one can admire the images carved on the struts of the temple as less brutal incarnations of the idle deity.

Nonetheless, the doors of the temple are opened by the priest during Dashain and Pancha Prachar Puja only. Besides, a Nitya puja and Aarati are done for the temple by a priest of the Karmacharya caste from Taleju.

Wait, the non-opening doors here, don’t make sense on that, that it is a restricted area. Rather than that, it is an open temple that is open twenty-four hours a day.

You can go there whenever you want. You can have a seat on its pedestals, click photographs, take a circumrotation of it, and have a decent view of Bhaktapur from the top plinth of it.

The ancient anecdote says that once, Bhairav as his nature was giving trouble to the locals. So, to gain control over him, the Nyatapola was decided to be built. Because Lord Bhairav enshrined the Goddess Shiddhi Laxmi.

You can see the sanctum level of Nyatapola is at the same height as that of the first pinnacle of Bhairavnath Temple. That means Goddess Shiddhi Laxmi dominates Lord Bhairava.

Well, it is also said that the Nyatapola was made that high because the king wanted it to be seen from his palace.

Earthquakes and the Renovations

Nepal is such a place where the possibility of earthquakes occurring is so high. Kathmandu, the capital of Nepal, is thus counted among the top 10 cities in the world that have a high risk of damage via earthquake.

On that occurrence, the erection, plus the survival of Nyatapola through all these years, make everyone astonish. Well, there are no records found before the earthquake of 1835 A.D (1891 B.S.). But there is a series of afterwards occurrences that are illustrated below.

Since this is not open to ordinary people, there are very rare cases of the opening of this temple. Once, on Aashad Suklaparewathiti, on the same date, a goat is sacrificed over there. With that, a symbolic flag is placed on its pinnacles. Some Awal people behold this kind of job. This job is very risky.

Yet, they do it with great joy and belief. This worship is denoted as Barsabandhan puja. By this year, Nyatapola will be three hundred and eighteen years old. 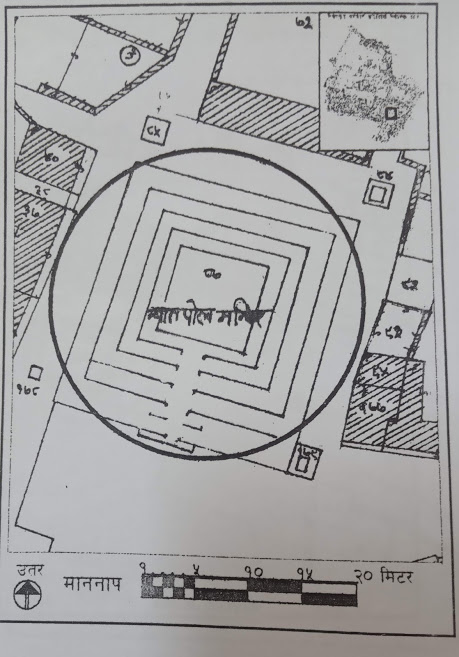