Bhaktapur is one of the Capital Trio of Nepal, along with Lalitpur and Kathmandu. This city which was once a Malla nation is both ancient and eccentric. You can still find traces of ancient history in many places, including the ancient temples, always filled with centuries-old houses and local tales passed down from ancient times.

Yes, there are tons of real-life ghost stories in Bhaktapur. After all, this city is filled with myths of deities and real-life massacres carried out through generations of kingship and battles. Therefore it would be a shocker if a city with such a deep history had no ghost stories.

Let’s dive into this world of the supernatural with three Real-Life Horror Stories of Bhaktapur!

Bhaktapur is filled with countless temples. While most of the temples are well known, some have lost their origin. No one knows where they came from or who built them. All we know is that these temples of unknown origins are ancient.

Among many unknown temples here, nine temples of Nava Durga Devi stand out for a rather spooky reason. In this real-life ghost story, I will tell you why these temples stand out from a recount of my grandfather.

Around forty years back, Kathmandu valley was something completely different. The modernization was relatively less, and the majority of the Valley was still open fields, including where my grandfather grew up. The roads used to be open and empty, surrounded by green fields. There were few paved roads; most were dirt paths beside grassy and muddy fields. Along these dirt roads across the fields, there used to be small temples.

My grandfather was a farmer, just like everybody else at that time. The only thing was that for my grandfather, farming was a job and a hobby. He used to visit his fields just as a hobby and a method to kill time. This was before the time when TV became common, so besides talking with friends, there were no other forms of entertainment.

That night was just like any other night. He ate his dinner and was getting ready to stroll to the fields to kill some time before sleeping. This was his usual routine, and there was nothing unusual about this, but there was no issue when he went to the fields. However, when he returned from his evening stroll, something unexpected happened.

As he was walking back home, he saw a tall woman with a torch in her left hand, sweeping the temple with a broom in her right. He was stunned for a while, but as he watched, the woman seemed to grow taller with each sweep. Scared, he jumped into one of the thick bushes near the temple. The woman never noticed him, but he had a clear view of everything, including her face. As he described, the woman’s face was terrifying.

He could see her abnormally long nose, sharp protruding canines that had some blood stains, and bloody red eyes. The woman never noticed him, so she swept the floor around. 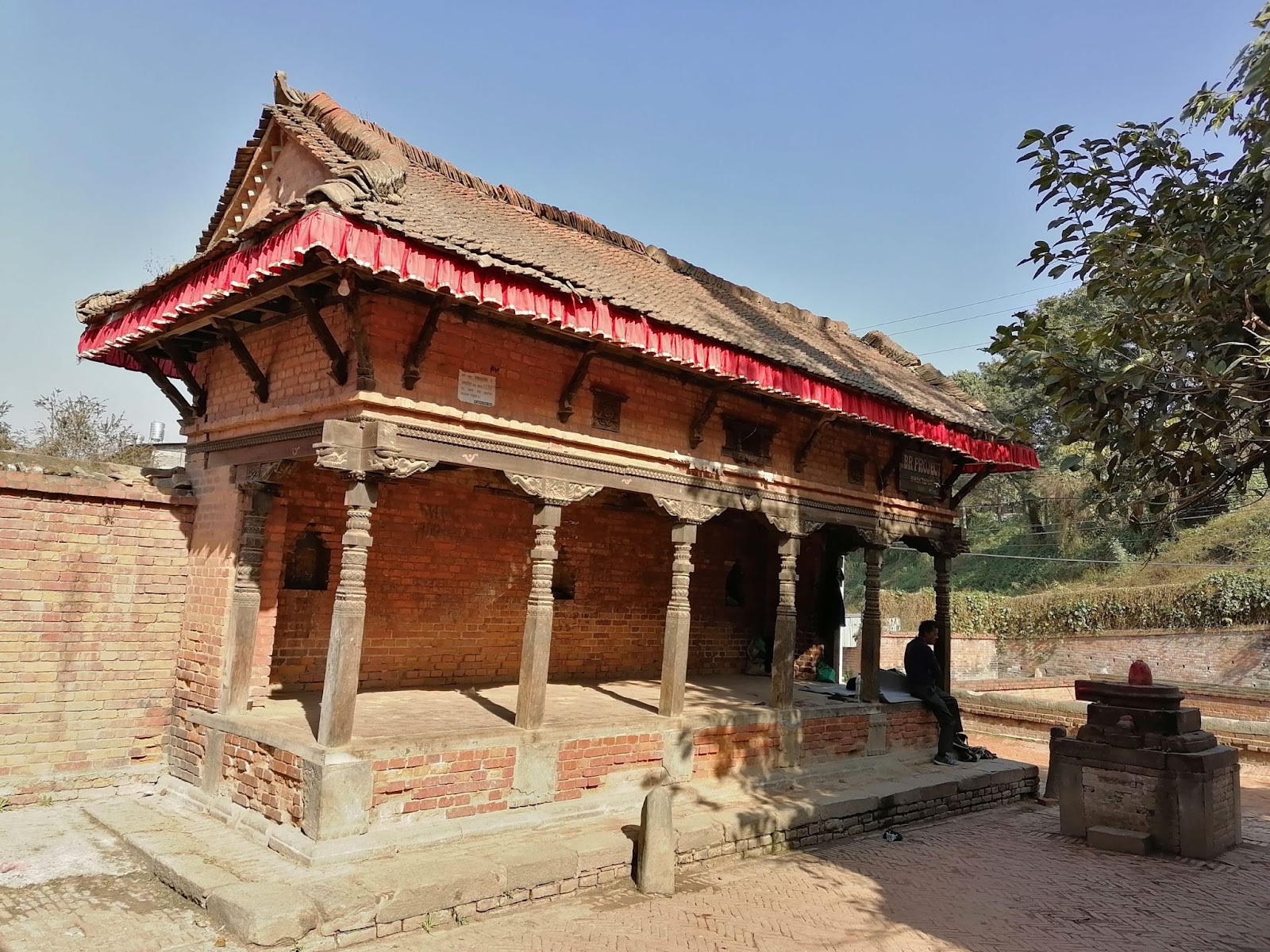 My grandfather slowly backed out with his slippers in hand to reduce any sound. The good news was that the woman never noticed him. After getting some distance from that woman, he just ran as fast as he could without setting any destination. He was rightfully scared.

After running perhaps some miles, he finally stopped on a local pati where he saw around four people sleeping. It was quite common to sleep in patis back in those days since there were no facilities for hotels and lodges. He was too scared to go back to his field or return home, so he decided to rest with those fellows. He thought that it was at least better than being alone. He wasn’t even thinking about sleeping in his right mind. But while trying to rest, he accidentally woke up those people. Rightfully annoyed, one of them asked him what exactly he was doing at this late hour.

Then, in a terrifying voice, he described what he had just seen. But while he was describing what happened back then, the people listening to him had some sort of expression of being both afraid and relieved at the same time.

My grandfather, noticing their expression curiously asked, “What exactly is going on? Whatever I saw back then, was that really bad or the worst?”. Then, a braver man said, “Brother, we look relieved because you are fortunate to have survived being in the sight of a laasi. Yes, what you just saw was a “laasi,” a demonic entity.

She is a weird demonic spirit since she is among the few who worship the gods to such an extent that their holy power doesn’t harm her. She sweeps and worships the nine temples of Nava Durga Devi every Saturday night, like today. You are extremely lucky, for Laasi are known to drag their victims and torture them before eating their flesh. If she had seen you, brother, we would not be here talking to you”.

Extremely terrified and somehow glad that he was alive, he recounted what his mother, said before he left “I have a bad premonition in my heart, don’t go to the fields,” which he had ignored. Thankfully he was alive. After that, he spent the night with these fellow brothers and did a puja as soon as he went home the next day!

Story 2- The demonic Spirit in Suryabinayak

This is my own true ghost story, or rather, a true experience, and it happened to me around 18 years ago. Back then, I was still in school. It should be noted that during this time, there was barely any form of advanced communication in Nepal.

The best we had was a black and white Nokia cell phone, and even that was very expensive. So unlike the modern-day, there was no way a school kid like me would have a phone. The best form of seeking entertainment on our way was to try alternate routes or hang out with friends.

One fine day, I was returning from school and bored with the usual route. I decided to take an alternate route from my school. The sun was setting, and the sky was a bright crimson. I heard someone calling me “Dai (big brother)” as I walked back home.

Since I was small, I didn’t expect anyone to call me dai, so I ignored the voice. However, the voice became constant as I walked and almost felt like it was coming from right beside my ear. Unable to hide my curiosity, I turned back and saw a scene that froze me on the spot.

Across the horizon, I saw a stick figure, looking dead in my eyes. As I looked,  that stick figure flashed towards me, phasing through the walls. As I watched, that figure sped towards me. Now back in the days, Suryabinayak was still a land filled with fields and canals.

Because of this, you would slow down quite a bit unless you are not human. And what I saw was far from being a human. Its entire body was nothing but skin and bones. As for its face, I don’t know. You would think that I would remember the face of the creature that still causes me nightmares, but I honestly don’t know what its face was like. Maybe my mind blocked it because it was too scary? I don’t know. That is not the point, though.

The point is, it was coming for me in the evening of the crimson sun. I think it only had around five meters to reach me when the sky changed. I was frozen in fear, unable to move, but I was saved.

When it reached the five-meter mark from me, the crimson sky turned grey, and thunder sounded. Along with this, a bright flash of lightning blinded my eyes. I closed my eyes on instinct. When I opened it, I saw that that spooky thing was running across the fields, like it was injured. Its stiff skeletal body was like a ragdoll behind its feet, and it soon disappeared into one of the homes. I was saved, but by what?

I returned home in confusion and asked my mother. She said you should never walk alone in empty fields under a crimson sky. As per her, this was the peak time for the demonic spirits to hunt, and it was divine intervention that saved my life. I was never a believer in the supernatural, but I am now. Although I am not entirely theist, I do believe that someone up there saved me from my doom that day.

Story 3 – The woman in the white of Siddha Pokhari

This is my short and not sweet true ghost story about a spooky encounter near the Siddha Pokhara of Bhaktapur.

This was a relatively recent event, so nothing is different from what we see in present times, but it was a while ago. At that time, I went to a friend’s wedding ceremony in Kathmandu and returned home with a friend on his scooter. As with every wedding ceremony, it was already past midnight by the time we returned.

I think it was around 12:30 when we saw the spooky outline of Sallaghari. But I guess we were used to it. We did travel the same route a lot. However, something was different this night; the air was unusually spooky.

My friend didn’t care, though. He was smoking and riding like there was no tomorrow. However, he suddenly slowed down and stopped. When I asked why, he simply pointed to the road ahead, where I saw an old lady sitting in a white sari.

It should have spooked us, but it wasn’t uncommon for mentally ill old people to come out at night along this route. There have been quite a few cases where old people with delirium sneaked out of their homes and did random stuff in the middle of the road.

We thought she was someone similar. He drove a bit forward to talk to her, intending to ask her whereabouts so we could send her home.

However, what we saw spooked us to our core. She was an old woman, but she was not ill. Instead, she was picking off bloody meat chunks off the street and wrapping them in her sari. The bloody meat had stained her sari red, but she had no expressions. Her stone face freaked us more. Without any delay, we sped to his home.

After we reached our friend’s home, we asked her mother. When she heard us, she told us that she was an evil spirit that had caused many accidents along that road. The only reason why we were saved was that my friends lit cigarettes. As per her, general ghosts do not like fire, and the ember at the tip of my friend’s cigarette counted as a fire! Never have I thanked someone’s smoking habit more!

Now here is a thing, these are stories from real people. Whether you believe in the supernatural or not, for these people, it happened to them in real life. Some of us seek the supernatural but never find it. However, for some of us, it finds us unexpectedly and leaves a scar on our minds. There are many other real-life ghost stories in these brick city streets.

You can find a local ghost story in every alley of this city. And similar to Bhaktapur, you can find ghost stories in all three cities of the Kathmandu Valley. Taking a walk Kathmandu Valley sightseeing tour and talking with the locals is an excellent way to gather real-life ghost stories of this brick city valley! So if you want to explore the city, then plan a trip from MountGlory, and fall in love with the city’s beauty.

The names of these stories have been changed for obvious reasons.