Bala Chaturdashi or the Bala cha: re

Bala Chaturdashi, often called Bala Cha: re is one trivial event but it has an essential place in our lives. It is also called the day of sowing Satbij. In the Nepalese term, it is pronounced as Satbij charne din, where the seven kinds of grains are mixed and sowed to the jungles of Sleshmantak.

Sleshmantak Ban or the jungle is contemplated as one of the holiest jungles of Nepal, which lies nearby in the complex of the temple of Pasupatinath. There is even an interesting story related to the beginning of this kind of liveliness, which is explained in the following topic.

Hereabouts, the day is very important for those who recently or within a year lost their family members or relatives. This event has the same importance and affection as in the Matathirtha Aausi or in the Kushe Aushi.

The only difference between that this day contain is that it doesn’t consider one specific member of the family to be rescued in heaven as in the other two major aausi. Instead, they all prayed for the proper departure of all the restless souls to heaven.

The Bala Chaturdashi generally lies on the month of Mangsir i.e, the starting of the winter season in Nepal. To participate in this ceremony or the event of sowing satbij, one must bathe on the Bagmati river early in the morning. Only after one would be qualified to sow seeds.

What does Bhaktapurians do if they ain’t able to go to Pashupatinath?

Well, Bala Chaturdashi is not an event that seems specified for one special community. Instead, even the newa community joins others for this occasion.

However, for some reason, if they could not make it to the Pasupatinath temple, they would then visit the comparable temples and shrines of the centre of the Bhaktapur, i.e., Bhaktapur Durbar Square. There is a temple in Bhaktapur Durbar Square, named Yakshyeshwor Mahadev temple which is equivalent to the Pasupatinath temple of Kathmandu. Thus, people often pay a visit to this temple on the day of Bala cha: re.

How about resuming the story related to scattering Satbij?

Stories and occasions are like the root and the branches of a tree. If there is an occasion or any festival, then there must be one known or unknown story over.

Even on this one middling important occasion, Bala Chaturdashi, one story of friendship and stupidity is gambled. And the story goes like this. This might not be the exact version of the story that you might have heard. Because we have different ethnic groups, their beliefs as well as their stories.

Thus, if one has a different story than this, then you can kindly write it in our comment sections.

Once upon a time…..as in every story starts like this.

There was a trader named Bala Nanda, who once went to the Aaryaghat of Pasupatinath to attend the funeral of one of his relatives. He was sitting nearby the cremating fire and having some ritual food. In that course of time, a bit of dead body popped out from the fire and landed on his plate.

Unknowingly, he swallowed it.

Abruptly, he transformed into a demon as speedily as he swallowed that portion of meat and became the demon with a silver head. In a spit of a minute, he became a cannibal creature from a human being. He just didn’t stop there. He started to pick the dead body from cremation and eat it, which made him an even more horrible, brute.

After that incident, people started to call him balasur which defined Bala as an asur (demon). And he, being careless and demonic in characteristics, started to terrify people and eat the dead bodies in Aaryaghat.

Being terrorized by this behaviour, the local people complain about him in the royal court. There, the king decided to diminish him. Thus, he sends a call to Vris and orders him to diminish Bala. Surprisingly, Vris used to be the best friend of Bala.

Being bound by the duty and at the same time, also adhered within the warm circle of friendship, Vris just couldn’t kill him. In spite of killing him, he started to worship Lord Shiva, and ask him for the way of sanctification for his friend, Bala.

Lord Shiva was so pleased with the sincere affection of Vris, for his friend that he agreed to help him in the salvation of Balasur. Also, Lord Shiva ordered him to sow satbij, so that the sins of Balasur could be cleansed and his own guilt for killing a friend could be erased. Thus, it is said that from that day, the seed dropping ritual precisely started.

A little more about Satbij

Satbij are often called Saptabij/Saptbij. As we already know, Satbij contains seven types of grains but did you also know that it symbolizes the seven planets. Here are the names and it’s representations as a planet of grains.

One fun fact about the Bala Chaturdashi

At the end of the Satbij sowing, Lord Ganesh’s idol present near the Bishwaroop temple is believed to be shaken and people even scream out and shout in the ear of that idol to wake him up. It is believed that Ganesh established there is deaf and people just try to wake him up through their silly acts. Hence, this adds a merry flavour to the entire ceremony.

Bala Chaturdashi or the Bala cha: re
57 Days Remaining 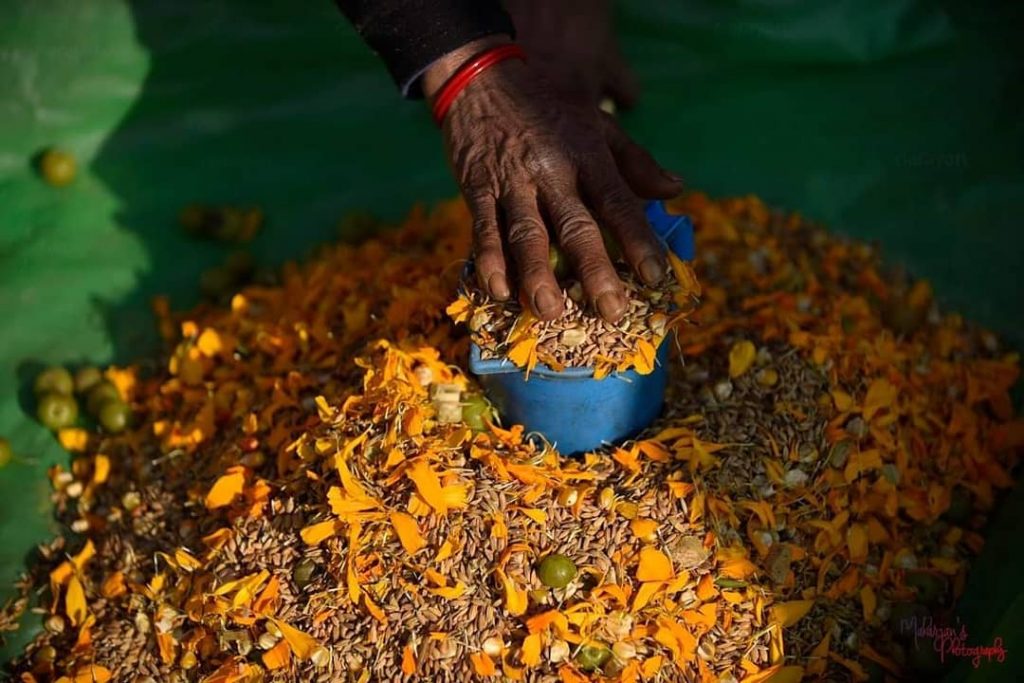