Bhaktapur Durbar Square; one amazing to place to sneak around Bhaktapur

Bhaktapur Durbar Square is one of the best places to sneak around at Bhaktapur. Or you can say it is the reason that makes travelers prefer to visit Bhaktapur. The Durbar Square of Bhaktapur is pretty amazing and different from the other two durbar squares of Kathmandu Valley.

Reasonably, it is grounded within the area of 6.52 square miles yet it has numerous temples and wow monuments in it.

One can sit for hours and hours on the pedestals of resthouse or of the temples, observing the stunning poses of Shalabhanjika. Shalabhanjika is an assumption of a woman who displays stylish feminine features standing near a tree and grasping a branch.

Thus, watching them in space of wood carving, it must be something more like an offbeat experience.

With that, the Bhaktapur Durbar Square offers a religious tour along with a historical sightseeing tour. As you can see more temples than the surviving palaces and monuments there.

And, for that reason, whenever people talk about Bhaktapur Durbar Square, they always start it with the temples, not the Royal palace of Bhaktapur neither the National Art Museum.

The temples in Bhaktapur Durbar Square

Bhaktapur Durbar Square, on one hand, is a historical site and on the other hand, it’s a pilgrimage. By seeing this bunch of temples in one place, Bhaktapur once was also defined as the city of temples.

While talking about the temples, each temple in Bhaktapur Durbar Square has a particular specialty.

According to Anjan Sharma, the priest of char Dham temples of Bhaktapur Durbar Square, the temples were then made to facilitate the common people cause the actual char Dham temples are farther from them. And, precisely take more time and money to travel.

Thus, King Bhupatindra Malla insist to make these temples within the arena of Bhaktapur Palace.

Jagannath temple is one of the four temples of Char Dham. It looks very common though it has one unique thing which makes it different from other temples.

Yes, the statue of Lord Krishna, Balrama, and their sister Subhadra, the images of these statues are quite unusual as they were made out of wood and have such big beautiful eyes.

One can capture those images only if they reach there at the time of Nitya puja, daily worship, early in the morning.

Badrinath temple is now reassembled in its initial structure after the quake of 2015.

The temple is made in terracotta style and stands right behind the Jagannath temple.

Rameshwor temple is one such temple of Bhaktapur Durbar Square that has neither the doors nor the walls. It only has a Chaturmukhi Shivalinga which represents the Rameshwaram temple of India.

Gopinath temple is the only temple that is made in Nepalese pagoda form among the Char Dham temples. It also has the statues of Lord Krishna and Balrama with Radha, not Subhadra. And, those statues are made of black stone which particularly might be perfect for the carving of those statues.

It just suits them.

You can have their glimpse too if you can make it during it’s Nitya Puja.

Well, these four temples are the Char Dham of Bhaktapur Durbar Square. Besides them, there are way more temples in the Square.

The Kedarnath temple look-alike to the Badrinath Temple since both of them are made in the terracotta form. The temple is called Kedarnath because of the statue of Kedaraeshwor.

This 17th-century temple is so eye-satisfying. Through which’s eastern pedestal, you can observe the entire durbar area along with the rest house and temple of Vatsala Durga Temple. While from the western or the front pedestal of the temple, you can have a glimpse of entire char Dham temples.

Vatsala Durga temple is the white elegance of Bhaktapur Durbar Square. It looks more like the Krishna Mandir of Patan but it’s not the one. It is the temple of Tantrik Shakti, Durga that in the form of Sri Yantra. You can see a Kalash as the representation of Vatsala Durga in the temple.

Besides, the temple has a barking bell hung right in front of it accompanying the beautiful stone creatures elephants and lions.

The temple was erected by King Yakshya Malla. Accordingly, the temple was named after him and ended up as  Yakshyeshwor Mahadev temple. The temple is situated behind the vatsala Durga temple.

Shiddhi Laxmi temple of Bhaktapur Durbar Square is also called Lohan Dega, the stone temple. The temple is as beautiful as the Vatsala Durga temple but undoubtedly has more guardians.

As per some folk talks, the very first pair of guardians of the temple is related to the then’s society and human behavior. It simply shows what happens when a child is raised by a father or a mother. The difference is shown there, all you need to do is go and find it.

Bhaktapur Durbar Square, one of the finest pace of art and architecture is no neglected by the royal touch. It was grand as well as technically very powerful and safe. It is said that it was the most powerful castle of that time frame. Thus, secure and durable.

Likewise the temples, there are different chowks within the palace where each of them has different purposes and utilities. They are purposed according to their names.

Besides, there are more courtyards like Bhandarkhal for the weapons and treasures collection, Yamadwar chowk, Kumari Chowk, Bhairav Chowk, and many more.

However, all these courtyards are now limited to 12 in numbers which were said to be of 99. There were more palaces in Bhaktapur Durbar Square and was more expanded too.

Today, half of its area is filled with governmental offices as it used to be in Malla’s reign. But we still have Simhadwaka Durbar and 55 windowed palaces gracefully standing in front of us.

Here, Shimhadwaka Place is now replaced by the National Art Museum. And 55 windowed palace, it remained the sam

The conduits of the Bhaktapur Durbar Square

There are importantly two main conduits in Bhaktapur Durbar Square. One within the palace and another outside of the Palace.

The royal conduit that is in the palace is called Nagpokhari. That, definitely because of its presentation. It has a beautiful stone sculpture of a snake, all cut into pieces. With that, it also has a unique conduit decorated with different animal images. 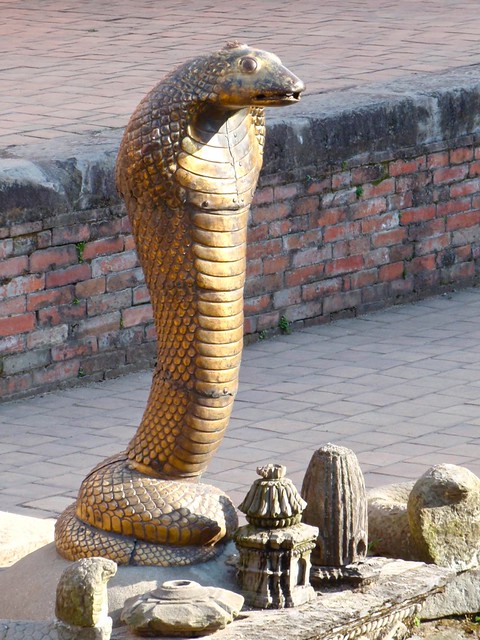 Quite likely, the conduit outside of the palace seems more old and antique. It is named Sunkhen hiti. However, it also has an exceptional stone carving on the conduit. Moreover, it has more ancient images of Lord Bhairav and other deities.

The ponds in the Bhaktapur Durbar Square

At some point in time, Bhaktapur was also called the city of ponds. Hence, there were a lot of ponds. And today, they all are counted on fingers.

Moving forward, within the arena of Bhaktapur Durbar square, there are only three official ponds.

Nag pokhari is the same pond that has the presence of a stone snake and a beautiful conduit. Though it is famous for the conduit but is called Pokhari, means pond. However, the water of the pond is not favorable to touch or play. It’s green and quite uncommon too.

Bhanda pukhu, also name as Bhandakha pukhu, Bhandarkhal Pokhari is a different courtyard locates within the Bhaktapur Durbar Square. It lies in the Bhandarkhal Chowk and is quite mysterious too.

The mysterious fact is not in the pond but in its surroundings. There are some mysterious carvings carved in the western wall of the pond, it’s more likely is a story.

Like other ponds of the Bhaktapur, it is also filled with water but is green. Coincidently, it also has a similar kind of carving of a snake as in the Nag pokhari.

And, yes the entrance of this pond is the most unique part of the whole Bhaktapur Durbar Square. You would find it out, once you see it that why is it so unique.

The pond lies in the western hemisphere of the National Art Museum with a different entrance, of course.

Dwinmaju pukhu, you can call it a secret pond of the Bhaktapur Durbar Square. Since it lies within the northwest part of the palace and one must cross through the Mulchowk to reach there. And, not everyone is allowed to the Mulchowk.

Therefore, only locals and the Nepalese denizens could enter there.

There is a belief that taking bathe in this pond can cure ailments like loss of appetite and malnutrition among infants.

The golden gate is basically called Swarnadwar which means gold plated door. But it is also golden in sense of its exceptionally beautiful carvings and techniques. Though it was one of the last contributions from Malla reign, this single gate worth more value to the whole Malla reign.

The gate has a gorgeous replica of Taleju Bhawani, also the symbols of Astmatrikas. The gate looks like a complete package, filled with Nepalese architecture, carvings, symbols, temples, inscription, and noticeable spangles.

The Statue of King Bhupatindra Malla

One, a very different and devotee-like king of Bhaktapur was the King named Bhupatindra Malla. Today, when we transpired in Bhaktapur Durbar Square, most of us must not notice the statue and its devotional position, of course. 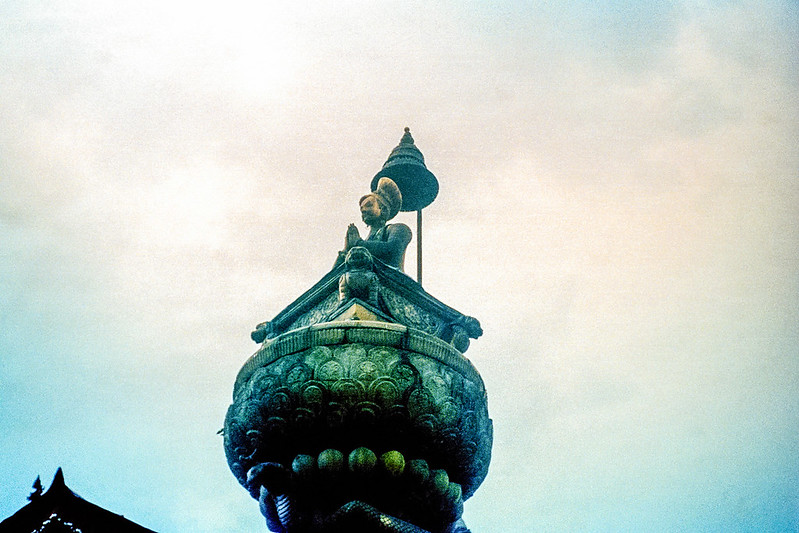 But, in the evening, from the pedestal of 55 windowed palaces, you couldn’t deny saying that the statue looks much more beautiful than anything else at the Bhaktapur Durbar Square. It’s just pristine.

Taleju Bell, on the right of the statue of King Bhupatindra Malla, is also called Tagao ghan which means the big bell. Indeed, it is the biggest bell of the Bhaktapur. Every morning, a person rang it as a part of devotion to the Taleju of the inner courtyard.

The morning and the evening must be the best time to hang around in Bhaktapur Durbar Square.